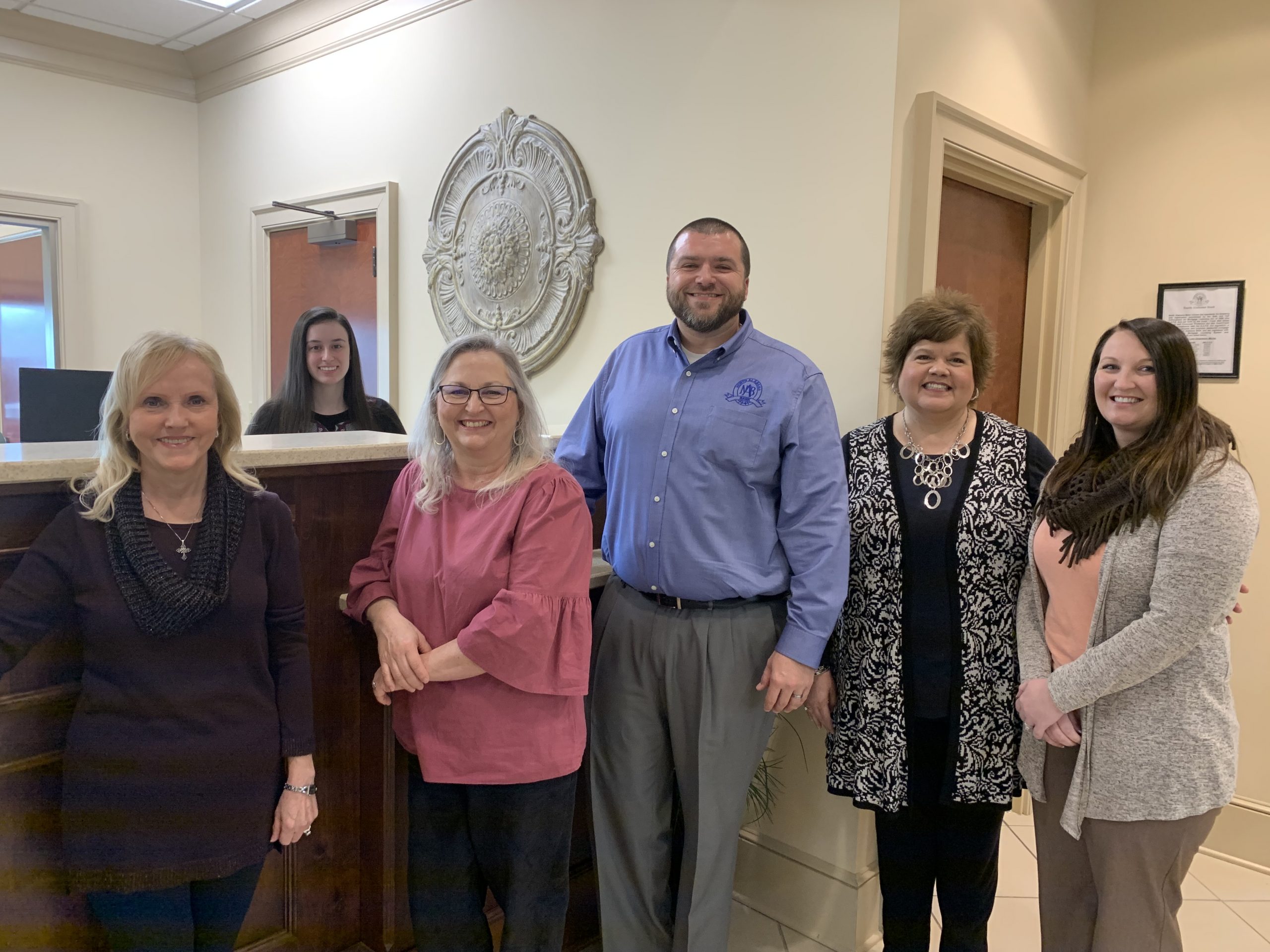 When you walk in the Ardmore branch of North Alabama Bank (NAB), you will see six familiar faces. Each of them helps make NAB have a feeling of community.  Ben Whitt is the NAB Assistant Vice-President and Ardmore Branch Manager.  Ben is an Ardmore High School graduate and has 17 years of banking experience.  He has been with NAB since October of 2018.  Ben is married to Shea Crawford Whitt from Athens and they have two boys, Miles (4) and Crawford (6 months).  Ben is an active board member of the Boys and Girls Club, a Deacon at First Baptist Church of Ardmore, and a board member and active member of the Greater Ardmore Chamber of Commerce.  He enjoys spending time with his family and going to Antique Truck, Hot Rod, and Car shows.  I know firsthand that Ben has a servant’s heart from my work with Ben on the Chamber and working with him on other events around Ardmore.

Angie Stegall is the Loan Processor at the Ardmore branch of NAB.  Angie is married to Eric Stegall and they have lived in the Ardmore area for 25 years.  They have one daughter, Erika Stegall (29).  Angie has been in the banking business for 36 years and has been with NAB for 10 years.  She joined the Ardmore branch in February 2019.  Angie is the caretaker for her mom, and she enjoys sewing and crafting.  She attends Woodland Hills Baptist Church in Huntsville.

Justine May is an Ardmore High School graduate and has 14 ½ years’ experience in banking here in the Ardmore area.  Justine is the Head Teller and has been with NAB since October of 2018.  She has three daughters, Kristen Davis (35), Kristel May (35), and Kristina May (25).  She enjoys spending time with her mother and her daughters.  She also enjoys reading, traveling, and she attends Wooley Springs Church of Christ.

Heather Newberry is the Customer Service Representative for NAB.  Heather was raised in the Blanche area.  She is married to Josh Newberry.  Heather has two boys (Braxton McConnell (15) and Blaine McConnell (14)) and three stepchildren (Harlie Newberry (16), Kylie Newberry (15), and Brady Newberry (11)).  Heather has worked in the banking business for 4 years and has worked with NAB since October 2018.  Heather spends her spare time volunteering at Blanche Middle School and serving as the Blanche Middle School Cheerleading Coach.  She also attends Community Independent Baptist Church in Toney.

Lexus Burgess is a Teller for NAB.  She started working at NAB in January of 2019.  She was home-schooled and was raised in the Ardmore area.  She attends Grassy Mountain Free Holiness Church.  She enjoys spending time with her friends outside of work but when I asked her about her job, she told me that working with Ben and her co-workers made her job the best job she had ever had.

Kathy Davis is a Part-Time Teller for NAB.  She started working at NAB in early December of 2019.  She is retired from Redstone Arsenal.  She is married to Tommy Davis and Kathy is also an Ardmore High School graduate.  Kathy enjoys the outdoors and enjoys biking, fishing, hunting, and spending time with her family.  Kathy attends Community Baptist Church in Ardmore.

When I ask what makes NAB different from other Banks, Ben said that he hopes what sets them apart from other banks or any other business is their customer service. They strive for excellence in serving their local community by genuinely caring for their customers. They never want their relationship to be purely a business one, they want to personally know who the customer is and who their families are.  This helps them serve them better and helps them build a better relationship with their customer.

When I asked what do they want North Alabama Bank to be best known for or remembered for?  “We want NAB to be remembered for our love for our customers and this community. We all feel very fortunate to all live locally and serve the people of Ardmore and surrounding areas. In this technologically advanced time, you can open accounts or even get a home loan online without ever leaving your house. We consider it an honor and privilege to have customers that trust us with their finances and banking relationship.  We hope to always treat you the way we want to be treated. We want you to leave NAB Ardmore every time knowing you have been treated with the love and kindness of Jesus.”

While North Alabama Bank may have only been in Ardmore a little over a year, North Alabama Bank has been serving the surrounding area for over 30 years.  I believe our community is fortunate to have them in our community.  When you walk in the Bank, you feel welcomed and you know that they care.  I enjoyed my time getting to know each of them at the Bank and learning more about NAB.  I think we are lucky to have NAB and each of their staff as part of our community.