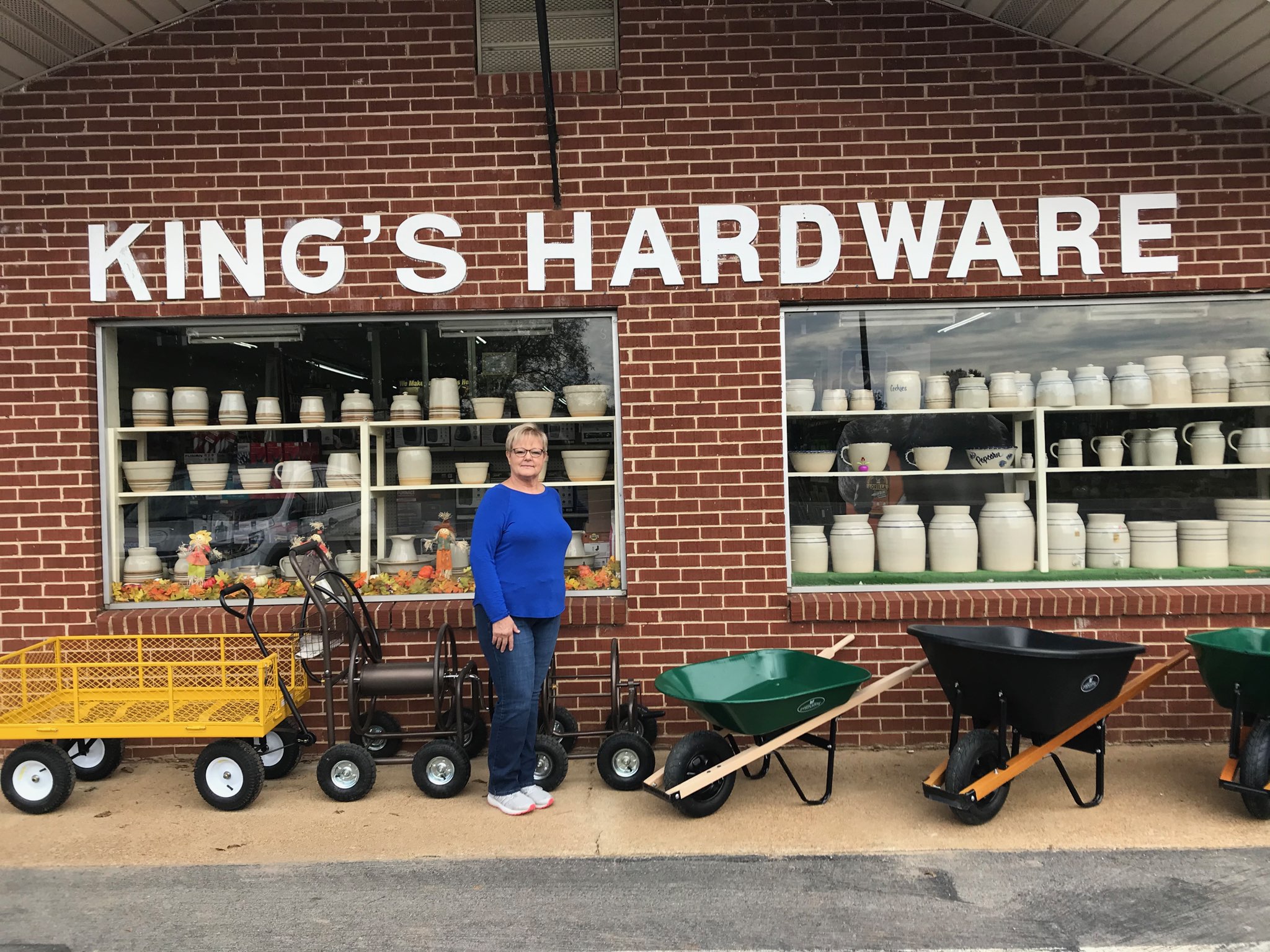 The Greater Ardmore Chamber’s Featured Business of the Week is King’s Hardware. King’s Hardware is owned by Joan King.  It is located at 26201 Main Street, Ardmore, Tennessee.  Joan and her late husband, Lee King, bought the hardware store from Stanley and Margaret Rolin in October of 1985.  Both Stanley and Margaret helped Joan and Lee learn the hardware business, but Margaret was especially helpful as they transitioned into their new adventure.

Lee King grew up in Ardmore and graduated from Ardmore High School.  He joined the Air Force and was stationed at Craig Air Force Base in Selma, Alabama.  Joan grew up in Selma and this is where they met while Lee was stationed there.  They got married in 1977 and moved to Ardmore in 1979.  Lee worked for a short time in Huntsville and was not happy and the company Joan was working for was closing.  The Rolin’s were selling the Hardware store and everything just came together.  Lee and Joan were a young married couple so in reality, they grew-up in the Hardware business!  Lee and Joan ran the business together from 1985 until Lee died in December 2018.  Joan runs the business now, but she is quick to point out she could not do it without the great employees, whom she is so grateful to have.

When asked what does King’s Hardware do?  That is a pretty simple answer, but it is more than just bolts, nuts, nails, and hammers.

When I think about some of the difficulties some of our businesses in small towns face today like competing with companies like Home Depot and Lowe’s I am sure it is difficult both financially and emotionally to keep a business going.  I asked Joan what keeps her going and she said the people in the community and the respect and dedication they have shown her.  She said the outpouring of love and concern shown for her and her family since Lee’s death has kept her going.  Also, her family and her faith in God keeps her going.

When I asked Joan how her family is impacted by the business, she told me they are very proud that this business is based on integrity, honesty, and concern for their customers.  For those of us that knew Lee King, I think we could all agree this is how he ran King’s Hardware and he would be proud of Joan and that she has continued his work today.

Both Lee and Joan have left their mark on Ardmore.  Lee was active in numerous civic groups in Ardmore (Veterans, Advisory Board at First National Bank, CHO) and Joan helped start CHO and is a member at Community Baptist Church and together donated to numerous organizations.  They made their home and raised their children here in Ardmore.  Lee and Joan have two children, Kim King Claunch and Andrew King.  They also have two granddaughters, Carly and Anika, and three step-grandchildren, Abby, Nathan, and Charlie.

When you walk in King’s Hardware, you see the variety of items that they sell, but it is not just the merchandise that make King’s Hardware special.  Lee King left a legacy in Ardmore.  He believed in good customer service and always doing what you could to help the person that walked through the door of the store.  Joan has continued that at King’s Hardware and her staff, Billie Jo Belcher, Sirena Ikard, Lee Rodgers, Andy Hargrove, Jacob Schrimsher, Josh Wales, Nick Embrey, and Bleu Emerson are also doing the same.  I believe Lee would be proud of their work.  I recommend you go by King’s Hardware.  As Joan mentioned to me, they are pretty much an open book, come in and say hi, even if you don’t need anything.  Anyone is welcome.