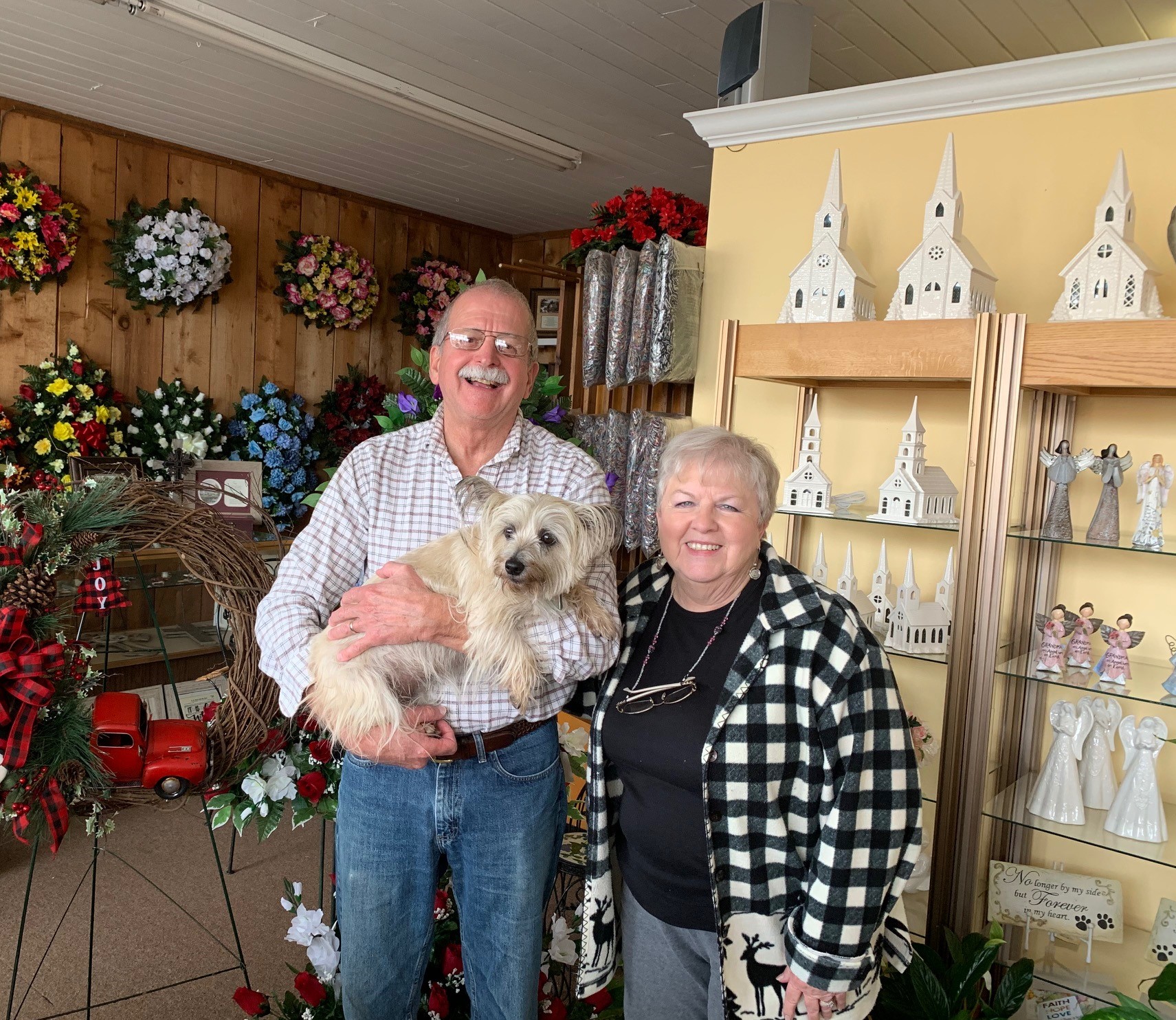 In addition to Peggy and Tommy Starnes, Ardmore Florist has four other employees, Stacy Bowen, Jennifer Cross, Lynette Rochelle, and Margaret Wood.  When I asked Peggy, what keeps her and Tommy going because at times I know it can be difficult running a business in a small community she said it was her great employees.  I have witnessed how wonderful her employees are first hand on several occasions.  They always have great customer service and have always been able to help me any time I needed assistance, even when I didn’t live in Ardmore and called and needed their assistance.

I have learned during this interview that Tommy Starnes is quite a wood craftsman.  He is a man of many talents.  I already knew that both Tommy and Peggy had servant’s heart not only because of their work at Ardmore Florist but because of their work over the years with numerous civic and charitable organizations in Ardmore like the Boys and Girls Club, Lions Club, Greater Ardmore Chamber, Optimist Club, Ardmore Charities, and I am sure there are many others.  They bring that same passion of helping others to their business.

If you have not walked into Ardmore Florist recently, I encourage you to do so.  They will customize a flower arrangement for you.  They have silk and live flower arrangements (saddles, spray, flowers on an easel, and flowers with inserts). You can order a plant garden, assorted plants, or fresh flowers.  Or if you want to purchase something other than flowers, you have that option as well.  I could actually spend hours in their store looking at the variety of merchandise they have.  They have a nice selection of Crosses, Framed Pictures with Inspirational Verses, Plaques, Birdhouses, Ceramic Churches, Tapestry woven throws, Collectable Willow Tree Figurines, Diffuser Oils, Lanterns, Garden Flags, House Flags, Jewelry, Wreaths, Candles, Auto coaters, Baby Gifts (gender reveal, shower, hospital, etc.), Balloons, Helium,  and many other items as well.

Peggy and Tommy have lived in Ardmore for 43 years.  Peggy is originally from Woodbury, Tennessee and Tommy are originally from Tullahoma, Tennessee.  They have 3 children, 7 grandchildren, and 6 great-grandchildren.  Tommy’s work at Ardmore Industries brought them to Ardmore and they moved because of this work but this work brought them back.  Their daughter, Vicky Bradford, worked for Linda Keith at the Florist Shop and they bought the store the following April and then their daughter Becky Shelton came to work with them after they bought the store.  Since buying the store, Becky has become a registered nurse and has 3 grandchildren.  Vicky has 3 grandchildren and babysits.  Their son, Robert Starnes lives in Pennsylvania and has 3 children.

When I asked Peggy and Tommy what they want to be remembered for they said they wanted to be remembered as a full-service florist.  This really goes hand-in-hand with how they got started because Peggy and Tommy got started in the flower business because of their love for flowers and if you look up why people send flowers you will find out that sending flowers is an expression of endearment or a gift that provides comfort.  If you spend any time with Peggy and Tommy you also know that they enjoy spending time with people and they truly care about people.  When I think of Peggy and Tommy Starnes, this is how I think of them because they have always been patient and kind as they have helped my own Father over the many years select the perfect arrangement of flowers or gifts for my Mother.  So, when I think of Ardmore Florist, I know I will think of them as “a full-service” florist.  They are also a Teleflora member which means they can make deliveries all over the world.  We have had Ardmore Florist in Ardmore for almost 60 years and our Greater Ardmore Chamber and Business Community has really been blessed with Peggy and Tommy Starnes’ leadership and commitment to serving our community.