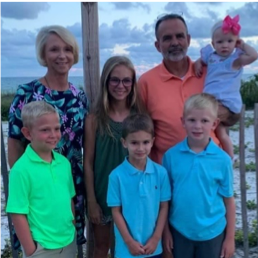 When I asked Wayne about how he got started in the business of Cabinet Making, he told me it was honestly a lot of praying and a lot of support from his family and especially his wife, Sherry.  He had a job at Teledyne, but he was working shift work and missing a lot of family activities.  He enjoyed woodworking and was always going into seeing Amp at the Cabinet Shop for different supplies for his own side projects.  Amp and Ricky were getting ready to sell their business and Amp had mentioned selling to Wayne.  Wayne said he and Sherry prayed a lot and they decided they could make this work for their family and they did.  So, in March of 1990 Wayne and Sherry became the owners of Ardmore Cabinet Shop.  Sherry handles the business side of things for Wayne and together they are a team.  Through the years Wayne has been able to be involved with his family and church but many people may not realize he may be working at midnight finishing a project just so he could attend a birthday party or a soccer game earlier that day.

In addition to Wayne and Sherry Browning, Ardmore Cabinet Shop has seven other full-time employees; Kendall Tiemann, Doug Hudson, Glenn Blades, Jose Ochoa, Mac Derrick, Russell Resendez, and Terry Hill.  When he thinks about the future of Ardmore Cabinets and his and Sherry’s retirement someday, he hopes that the business will remain in his family.  His son-in-law is a gifted craftsman and he hopes his grandchildren will carry on the business.  He and Sherry have worked hard to build a future for their children and grandchildren and hope they will be able to give this to their future generations to come.

When I asked Wayne, what motivates him; he did not hesitate a moment when he answered this question, he replied “Family.”  He said that his family and his faith are his priority.  He left his job at Teledyne because he wanted to be able to spend time with his family, but it has been a lot of hard work to do this.  He put his faith in God and he and Sherry have been able to put their children through college and one through seminary.  Both Wayne and Sherry enjoy spending any free time they have with their family and grandchildren.  They are very active in their church, Wooley Springs Baptist Church.  They also enjoy their trips to South Africa where they are very involved in their daughter Courtney’s ministry called the “The Hidden Place.”

Sherry and Wayne both grew up in this area.  They graduated from Ardmore High School and have been married 39 years.  Wayne is the son of Donald and Faye Browning and Sherry is the daughter of Dortha and the late Billy Michael.  They have three daughters – Holly married to Kendall Tiemann of Ardmore, Brooke married to Will Jarrett of Tuscaloosa and Courtney married to Grant Apperson of South Africa. They have six grandchildren and a seventh arriving in a few weeks.

I graduated from Ardmore High School with Sherry and Wayne and was excited that they were selected as the Business of the Week.  When I interviewed Wayne for this article, I learned quite a bit about him and the Ardmore Cabinet Shop.  Ardmore Cabinet Shop is a business that we have had here in Ardmore for 40 years, 30 years under the ownership and guidance of Wayne and Sherry Browning.  I already knew that they both had a strong work ethic.  I learned that they have a great work staff and they produce a quality product.  I believe if you compared Ardmore Cabinet Shop’s work to any large company, you would see that their abilities and skills and quality craftmanship is better than most and they have an attention to detail that is outstanding – just ask those that they have done work for.  I think we should all take pride in the fact that they are from Ardmore and that we are very blessed to have another great business in our own community like Ardmore Cabinet Shop.